There is nothing more humbling than holding a new-born infant. I recently had such an experience as one of my daughters-in-law gave birth to a boy baby.  Welcome to your new world Nikko! Nikko’s reaction? He cried, I’m sure, realizing the kind of world he just entered.

My son and daughter-in-law live in rural Virginia, so Janene and I went there to help babysit their son and my son’s son from a previous relationship so Mom and Dad could concentrate on the birth of Nikko. As I have learned from my own experience of having five kids, no one can plan a family’s activities like a new-born baby.

Humorist Don Herold once said, “Babies are such a nice way to start people.” But it isn’t always so pleasant for the mother, as this scene from the film, Baby Mama,[i] illustrates:

Daniella, my daughter-in-law, is a strong woman, both physically and mentally, so I’m sure her labor was not nearly as dramatic. The day after Nikko’s arrival, we took two of our grandchildren to the hospital to meet him. It was my first chance to meet Nikko as well. I felt a bit left out, as during our short visit that day, everyone got to hold Nikko but me. But during the next few days, I got plenty of opportunities to hold and admire my new little grandson. As I did so, I recalled one of my favorite scenes from the movie, Father of the Bride, Part 2,[ii] where both the daughter and the wife of George Banks (played by Steve Martin) deliver on the same day:

George Banks is right. Life doesn’t get any better than that. Here is Nikko. Like all babies, he is beautiful:

With his brothers and Dad: 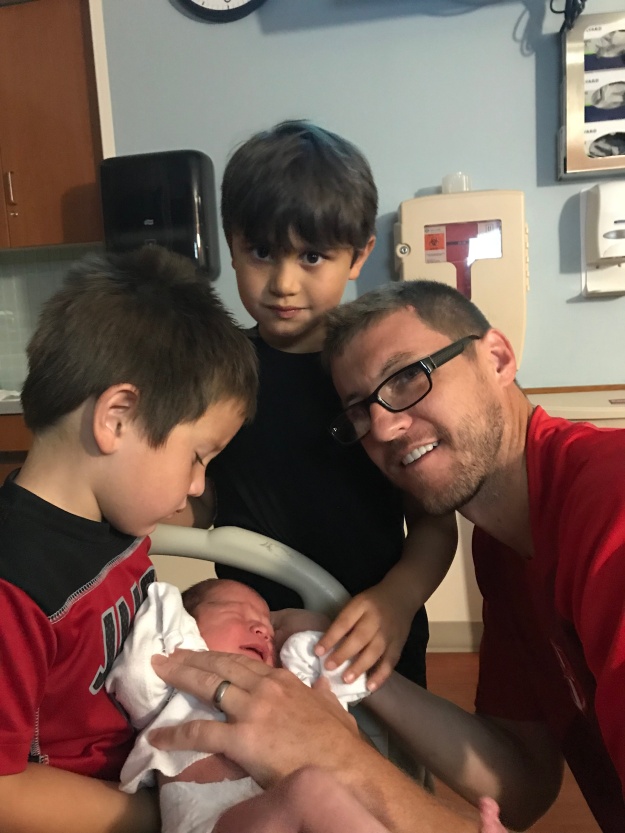 As a new parent, you quickly learn there is nothing like having a baby to realize it’s a changing world (pun intended). And one thing parents learn quickly is that the small, beautiful creature we call a newborn soon ceases to be an armful and grows into quite a handful. A significant portion of the childcare for Nikko will be provided by my son, Matt. In his family, Matt is the stay at home parent while Daniella works as a successful doctor at the local hospital. Many people think the so-called traditional family, with a working father and a stay-at-home mother, is the best arrangement for a child. But I have learned the most critical family arrangement is the one that has as many loving participants as possible, regardless of who is bringing in the income. It really does take a village to raise a child effectively – parents, grandparents, siblings, teachers, and others. It sometimes even takes a village to get a child a great haircut as this photo of my grandson, Dad and Grandma illustrates:

Because love is the key, biology doesn’t really matter. Love and commitment are more important to a child in the long run, regardless of genes. I love this scene from The Object of My Affection,[iii] which emphasizes this point that you don’t have to be the biological father to accept the responsibility of being one:

I have seen this work in my own family, as one of my other sons and daughter-in-law, first became foster parents, and then adoptive parents, to Dax, one of our 15 grandchildren. Although adopted, you would never know it from the way the entire family loves and accepts Dax. Nothing touches me more than feeling the love among family members, regardless of origin, looks, or abilities. And nothing angers me more than the hurt and abuse – whether physically, mentally or emotionally – of a child.

Experts tell us the first three years of an infant’s life might be the most critical. The Beginning of Life[iv] is an excellent documentary that explores a child’s development during those critical first three years. Babies are much more than just their inherited genes (although that is a large part of who they are). Young children are also shaped by their environment and their relationships to that environment. If we could create a better environment for all newborns, we can radically change the world (and not just their diapers). Here is the trailer:

Netflix has turned this documentary into a six-part series, The Beginning of Life: The Series. If you are a new parent or if you just love babies (and who doesn’t?) I highly recommend investing your time in this series.

One of the greatest things we can learn from a young child is to explore and enjoy being in the moment and admiring the simple stuff. A toddler loves, for example, dropping a spoon from his or her high chair. They love hearing the noise it makes. And they also enjoy watching mom or dad’s reaction. When was the last time we, as adults, found joy in such a simple thing? Sadly, adults are too worried about what happened yesterday, and what could happen tomorrow.

With all the terrible things happening in the world, it is a tough time to be born. Yet I hold great hope for Nikko because of the love of so many people surrounding him.

If only it were so for everyone.

[iii] The Object of My Affection

[iv] The Beginning of Life